Network interface cards (NICs) are a great solution for having fiber connectivity to PCs in 1000 Mbps Ethernet networks. Ethernet networks belong to various categories based on the transmission speed, which is the maximum achievable speed over a network under ideal network conditions. NIC is a data-link-layer device and also a physical layer device. It provides required hardware circuitries for network applications so that physical layer processes and data-link-layer processes can operate on it.

1000BASE T is a standard for Ethernet for local networks. The 802.3 standard of the Institute of Electrical and Electronics Engineers (IEEE) has specified it as a physical media. Data centers or others can use 1000BASE T NICs for network switch uplinks, server interconnections, direct use with the desktop, etc. An advantage of 1000BASE T is that you can use existing copper cabling instead of rewiring with newer-generation cables or optical fiber.

1000BASE T is a very common networking standard. 1000BASE T or Gigabit Ethernet has replaced old Ethernet standards like Ethernet (10BASE T) and Fast Ethernet (100BASE T). 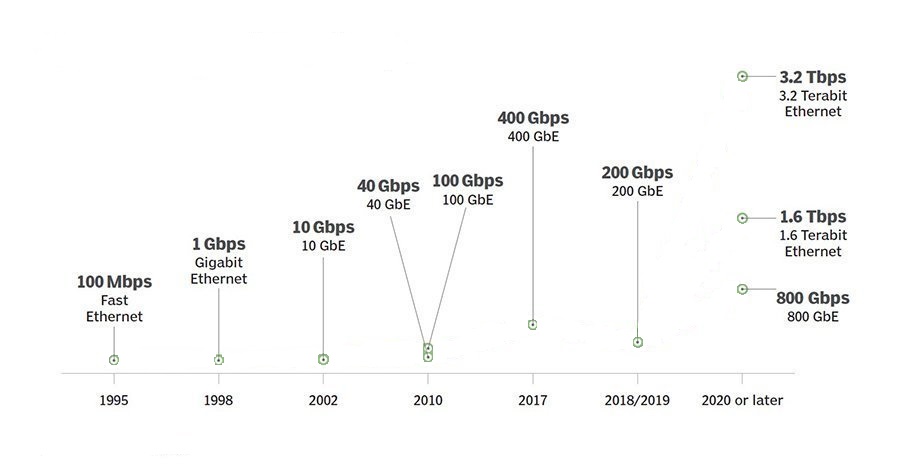 Figure 2: The roadmap of Ethernet speed

· BASE is for the standard as the baseband signaling of Ethernet.

· T is for the type of cable media, which is twisted pair.

Initially, backbone network links with high capacity used Gigabit Ethernet. Apple’s PowerBook G4 and Power Mac G4 featured the 1000BASE T connection, and those were the first mass-produced PCs to feature the technology.

Specifications of 1000BASE T

1000BASE T uses readily available and cheap cables pre-existing for various applications. It has four twisted pair cables for duplex communication: simultaneous transmission and receiving. CAT5 cable is the minimum standard, but it’s compatible with all recent standards like CAT5e, CAT6e, CAT6, and CAT8.

1000BASE T cabling has compatibility with faster standards also. Just like Gigabit Ethernet, 2.5GBASE T and 5GBASE T Ethernet can have the same CAT6 and CAT5e cables. 10GBASE T works well over CAT6 cables. However, these standards are auto-negotiated and interoperable, enabling easy upgrade paths. It allows users and businesses to keep using their existing wiring system and increase bandwidth with only minor upgrades.

The Ethernet ports of the 1000BASE T have to be connected to link partners. On a cable’s both ends, the speed settings need to be the same. As an example, both are set for auto-negotiating, or both are set for the same duplex values or forced speed. 1000BASE T applications use the RJ45 connector.

When the ports of 1000BASE T are ready to auto-negotiate, they can also eliminate the necessity for crossover cables using “auto MDI-X”. “Forced mode auto MDI-X” has its own algorithms, but it may not be applied on many devices, so there may be a need for a crossover cable between link partners, mainly when auto-negotiation isn’t activated.

For 1000BASE T, it’s better to use TIA/EIA Category 5 or higher Unshielded Twisted Pair or UTP cable with the TIA-568 cabling specification. However, while using a cabling arrangement of fewer than 4 pairs, it’s better to manually set the duplex and speed setting of the link partner and NIC. In addition, with 3-pair and 2-pair cabling, the NIC can only obtain a maximum speed of 100 Mbps. For using a NIC in a residential space at any speed, it’s better to use CAT5 or higher wiring. However, if the cables run through ceilings and walls or between rooms, it’s better to plenum-rate the cables for fire safety.